Monitoring Fires and Pollution from Space.

The European Space Agency (ESA) and NASA freely provide huge volumes of historic and current earth observation data from many of their satellite missions. These data sources are invaluable for many diverse fields, such as:

To illustrate some of this data in action, we focus on the extensive Bushfires that have burnt across Australia for the latter half of 2019 and the start of 2020. In particular we present animations of:

The VIIRS instrument identifies probable fire locations throughout the world at 375m x 375m spatial resolution, with global coverage at least every 12 hours, with mid-latitudes receiving 3 to 4 looks per day (see the VIIRS FAQ). Active and historic hotspot data is available from NASA’s Fire Information for Resource Management System (FIRMS).

A total of 10.2m hectares were burnt across Australia between October 1st 2019 and January 23rd 2020, based on locations identified as high likelihood fires by the VIIRS algorithm.

The animation below shows the growing extent of fires across south-east Australia, as it was the area most heavily afflicted over this period. The spread of the larger fires is clear to see, most notably:

Atmospheric Nitrogen dioxide (NO2) is a byproduct of fossil fuel and biomass combustion, and so can be used as an indicator of poor air quality at ground level from bushfires and other pollution sources.

The Sentinel 5P satellite monitors natural and man made emissions in the Earth’s atmosphere at a daily revisit rate, with data gathered at a spatial resolution of 3.5 x 7 km. Key emission measurements collected by its TROPOMI instrument are:

The animation below presents the daily fluctuation of NO2 levels associated with the bushfires, as observed over Australia and New Zealand from November 1st 2019 to January 23rd, 2020, calculated with Google’s Earth Engine. Brighter colours indicate higher concentrations of NO2, with red areas representing a peak atmospheric concentration of 0.0002 mol/m2. These elevated NO2 levels are tightly correlated with the smoke and ash clouds from burning vegetation, and can be seen drifting over much of eastern Australia and extending across much of New Zealand more then 4,000 km away, where haze was noticeably visible in the sky.

To put the scale of Australian bushfire NO2 pollution in perspective, the image below presents the average daily NO2 emissions observed across the world for 2019. Based on this picture, the peak levels of bushfire NO2 emissions is comparable to an average day for many parts of eastern China (as shown in red), where much of the world’s manufacturing and heavy industry takes place. Elevated NO2 levels (purple to yellow) can also be seen throughout the industrialised parts of Europe, North America, other parts of Asia and the middle East, but not to the same degree as for the recent bushfires of Australia. 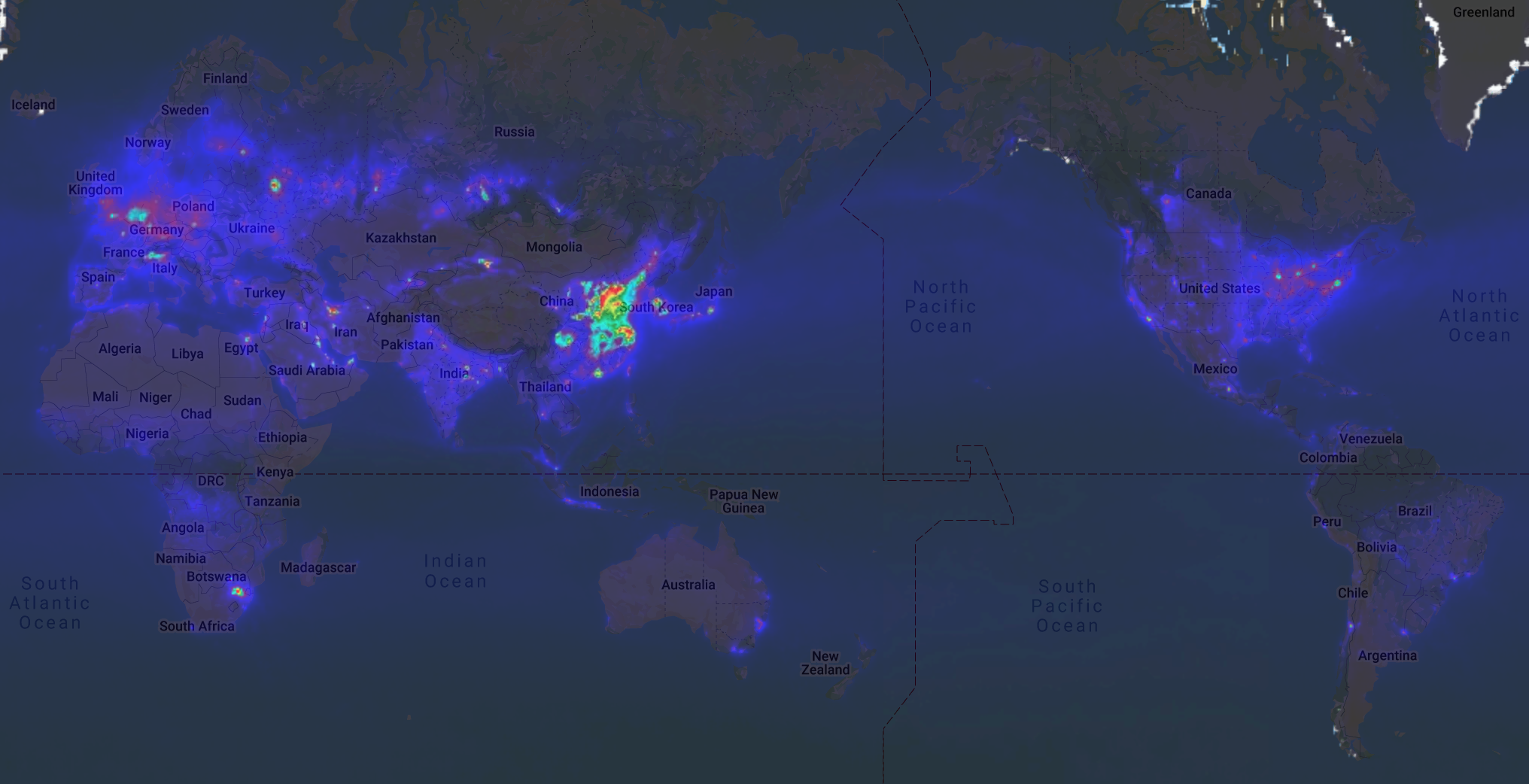 This example has shown a glimpse of the power that satellite data can offer for land-based and atmospheric monitoring projects throughout the world.

If you need help putting satellite data to work, then please feel free to get in touch.